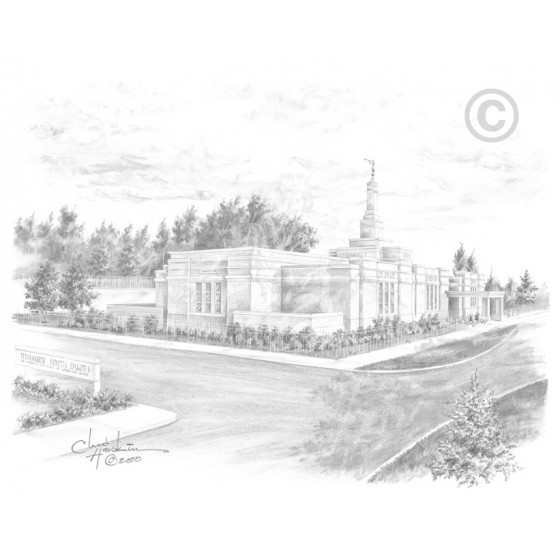 The Bismarck North Dakota Temple is one of a series of detailed pencil drawings and paintings created by the artist Chad S. Hawkins. In 1989, at the age of seventeen, Chad started this unique temple series, becoming the original LDS artist to involve hidden spiritual images in his artwork.

In the temple, members are taught more about the gospel of Jesus Christ and the purpose of life. Christ is the “Bread of Life.” Just as manna was showered down as bread from heaven to save ancient Israel from starvation and temporal death, so Christ came down from heaven to give living bread and living water to all men so that they might gain everlasting life. (John 4:10-38;6:30-65)

Depicting the “Bread of Life” theme, Chad has rendered the Savior’s image in the sky and across the surface of the temple. His arms are outstretched inviting us to attend the temple. Shafts of wheat are found among the shadows in the picture’s foreground. Wheat was used in this rendering because of its spiritual significance and its importance as an agricultural crop to the state of North Dakota. In the United States, North Dakota ranks number one in the production of spring and durum wheat.