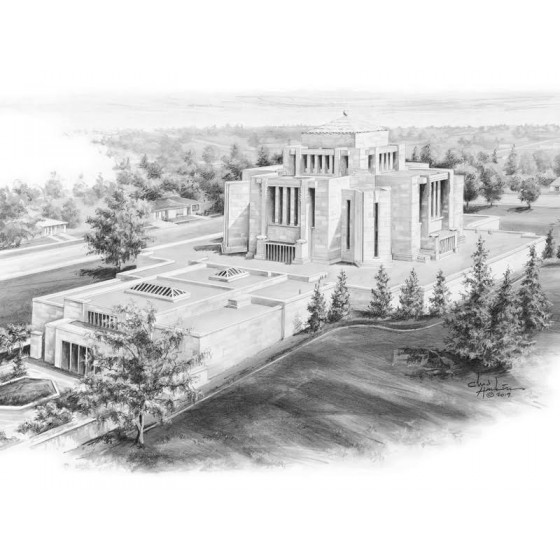 The Cardston Alberta Temple is one of a series of detailed pencil drawings and paintings created by the artist Chad S. Hawkins. In 1989, at the age of seventeen, Chad started this unique temple series becoming the original LDS artist to involve hidden spiritual images in his artwork.

For generations, the famous Old Chief Mountain guided the Native American tribesmen in their wanderings up and down the great north trail. Later, it became a guidepost for the stream of immigrants from the south to their new homeland in Canada. When the Alberta Temple was built, President Edward J. Wood, who served as its first temple president (1923–1948), prophesied that the temple would stand long after Old Chief Mountain had crumbled and fallen. A silhouette of Old Chief Mountain is included in this drawing among the shadows on the grass in the foreground beneath the temple.

Chad S. Hawkins has illustrated over 150 temples and sold more than a million pieces of temple-related art. He is widely recognized for his vast knowledge of temple design, building and history. He has visited over one hundred temples located on five continents. He is a popular speaker and author of the best selling book Temples of the New Millennium. His work has been featured in Church magazines, placed in the cornerstone of fourteen temples and is on permanent display inside the Vernal Utah Temple.